The air is 30 degrees below zero, so WILLIAM HAM BEVAN wraps up warm for an activity break in Finnish Lapland. Then they tell him to plunge naked into icy water...

Last season, one visitor to Finnish Lapland took on a mythical status in the region’s après-ski yarns. The man – British, in most versions of the anecdote – was being taken by his tour guide to see some reindeer. On spotting one, he was visibly shocked. ‘I thought you were having me on,’ he said. ‘I didn’t know reindeer were real – I thought they were…like Santa Claus.’

When I was faced with my first reindeer at close quarters, the thought struck me that he might have been right. The thing did resemble a hoax – an impossible, ungainly beast with shabby hide and antlers that looked as though they were glued on. But there it was, contentedly munching lichen from my hand; and what’s more, one of its relatives was about to take me reindeer racing. 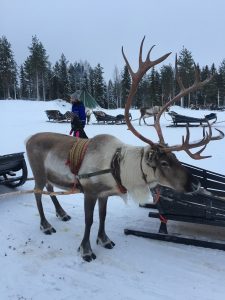 On a snowy plain near Levi, I eventually found a co-driver naïve enough to share one of the bedstead-like wooden sleighs with me. We took up position opposite another sled of novices, were hitched up to our two reindeer, and on a signal from one of the herders, we were off.

High-octane excitement it certainly wasn’t. But for such clumsy-looking creatures, our team ambled along with a surprisingly elegant gait, like slowed-down footage from a trotting race in America’s Deep South. We soon found that there could never be any race-fixing scandals in this sport, because the reindeer went at whatever pace they liked – no combination of our yanking the reins or yelling had any effect on their effort.

After 15 minutes in which pole position ping-ponged between the two sleighs, our reindeer – about to win by a nose – suddenly decelerated to grazing pace just as we approached the finishing post. That was that, then: defeat cruelly snatched from the jaws of victory.

I’m not one to bear a grudge, but it didn’t seem too difficult to overcome the cutesy Christmas-card factor that evening, and devour a platter of reindeer casserole. For the Sami people of Lapland, the reindeer – or poro – used to be everything. Their nomadic existence totally depended on the beasts, upon which they relied for food, shelter, clothing and transport.

Few of Finnish Lapland’s Sami population now follow the traditional reindeer-herding ways, but the poor poro still features heavily in the cuisine of the region: from theme restaurants offering traditional Sami feasts (rather like that famous Monty Python sketch, except with reindeer taking the place of spam) to the smoked reindeer cheeseburgers served in piste-side snack bars. The latter were delicious, as it happens.

The pistes themselves belonged to the two major resorts of Ylläs and Levi, which have found their way into many winter brochures over the past few years. Both are compact ski areas, with a limited vertical drop: great for beginners, but anyone above intermediate level will exhaust the terrain within days.

It’s still worth skiing here, though, just to experience a landscape so unlike the Alps, Dolomites or Rockies. For the most part, this area of Finland is flat, icy tundra, and the few hills rise abruptly from the plains. From its foot, the 718m Yllästunturi resembled a whitewashed Ayers’ Rock; but the summit was one of the most haunting, otherworldly places I have ever been. 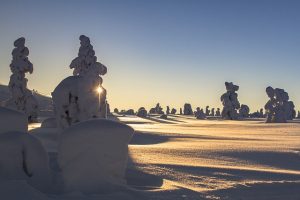 From the very top, there was a stunning 360-degree vista over the frozen plains, fading on all sides to grey under the low, watery sunlight. In the near distance, I had to strain for visual definition. Here, everything is white, and all shapes are turned into mere suggestions of themselves by the thick covering of snow. It doesn’t just rest upon the tops of the trees and pylons, as in the Alps: it clings to the sides of everything, as though the entire landscape has been dipped in a viscous icing. Trees resemble curvy works of modernist sculpture, and I was not the only one in my ski-guiding group to keep getting spooked by the boughs suddenly resolving themselves into stylised humanoid shapes: a mother and child here, a soldier raising a rifle there.

In Lapland, Nordic skiing – cross country – is more popular than the alpine variety: it’s unsurpassed as a means of seeing the scenery, but tends to entail a serious aerobic workout. A supposedly easier alternative is to join a snowshoeing expedition, as I did.

Though the air temperature was -15º, I found myself working up quite a sweat in my thermal all-in-one, hat and mittens (all provided by the sports centre – the Finns would never let you outside inadequately dressed for the cold). By the time we reached the halfway point and Miyra, our guide, opened her flask to dispense the carved wooden cups of hot chocolate, I was in palpable need of a sugar fix.

It was good, the next day, to be able to rely on another species for propulsion. Over at Levi, I had signed up for a husky safari. As soon as the group safety talk was over, and we had learned how and when to operate the crucial foot-brake, we tramped down to meet our dogs – and all hell broke loose. These are creatures bred only to run. The moment they realised that an outing was on the cards, they howled like the wolves that are their close relatives, and strained desperately at their leashes. Some even leapt over their neighbours, March hare-style, so that the staff had to come back and untangle the harnesses: it was the domestic mutt’s anticipation of walkies multiplied a hundredfold.

As teams of four or six huskies were leashed to each two-man sled, I noted the huge variation in the dogs’ size. Some were as bulky as collies, but my four looked as though they would be better suited to chasing a mechanical rabbit around a track: greyhounds in wolves’ clothing.

I wondered whether these could possibly keep up with their bigger brethren, but doubts were soon allayed. These four went as if they were rocket propelled. It was sheer exhilaration as I bounced along the single-file track, frequently standing on the brake to avoid catching up with the sled in front. Whenever this happened, our lead dog – a young bitch who had just been promoted to the position – would strain to run faster, then look over her shoulder at me with a stare of pure frustration, as if to ask: ‘What the hell do you think you’re doing?’

That evening, I discovered that when the sun goes down, the Laplanders have two obsessions: karaoke and sauna. How the former became so entrenched in the après-ski culture is anyone’s guess: one local told me it was fair game for them to pinch karaoke, given that so many people thought the Finnish giant Nokia was a Japanese firm.

Wherever I went, from a small roadside bar in Ylläs, to Finnish Lapland’s biggest club, the Areena in Levi, there was karaoke – and it was taken very, very earnestly. Whenever someone went up to tackle a Finnish-language song (these, all sounding dark and funereal, outnumbered international hits two-to-one), the over-thirties would take to the floor to slow-dance, and there would be polite applause at the end. The efforts of younger bar-goers to whip up a more rowdy atmosphere with the latest skater-punk, Euro-disco or Robbie Williams tracks tended to invite quizzical frowns.

Sauna has been part of Finnish culture for considerably longer. Here, the etiquette is well established: nudity is the implacable rule, though the sexes are segregated. All prudishness was soon burned away in the crematorium-like temperatures, and it suddenly seemed a very civilised thing indeed to be discussing the day’s activities with nine other men, all unashamedly starkers and sweating like swine, with a cold bottle of Lapin Kulta beer to hand. That was until someone suggested a trip outside to the ice hole.

Together with bungee jumping and grade-five white-water rafting, my ice-hole excursion has been stored in the mental file marked ‘Mind-blowing experience – never again, thanks’. Matti, our Finnish host, warned us to wear flip flops on the trip between the sauna and the icy plunge pool, else our feet would freeze to the ground, which was a bracing –30ºC.

In the event, the flip flops froze to the ground instead, leaving me leaping from one foot to the other, Sahara sand-lizard style, as I waited for the previous victim to vacate the tiny pool. The theory was that the water in the ice hole, at just above freezing point, should be no problem after braving the sub-zero air temperatures. In practice, as I pushed my shoulders under the icy water, I thought my diaphragm had contracted to the size of a shuttlecock, and was about to pop out of my mouth. I was back in the sauna in five seconds flat, only returning to chisel the flip flops from the ground when I was safely dressed in fleece and padded jacket.

For me, the best part of the sauna ritual (though one that outrages Finnish purists) was a spell in the outdoor hot tub, looking up at the Northern Lights. These were nothing like what I had expected, which was something akin to the opening titles of Doctor Who. The swirling multi-coloured lightshow, as featured in most photographs, occurs only rarely. The usual version is more subtle: at first, I mistook the lights for a high cirrus cloud, until I noticed that it was glowing the eerie green hue of luminous paint on a watch dial. Once my eyes had tuned in, the aurora made for a mesmerising spectacle, with wisps of luminescence chasing each other across the horizon and swooping down in angel-wings.

The lights were again playing across the sky when I joined a trip to meet Lapland’s most famous winter resident: Father Christmas, in his ‘secret hideaway’ deep in the forest. Here, families can come and meet the man himself for a chat, a roasted marshmallow (for the kids) or sausage (for grown-ups), a photo and certificate to prove their visit. Although he looked rather younger than expected, Santa’s credentials seemed genuine.

A question and answer session with us older kids yielded the responses that it was magic that let him loop the world in one night; yes, he did like to sauna in the nude; and no, he bore no grudge against his impersonators in department stores.

Santa’s elves also introduced us to some of his reindeer: Prancer, Comet, Donner and Blitzen (given the local diet, there was flippant speculation that Donner might well end up as a kebab). We searched for Rudolph, but none of the creatures tethered in the clearing seemed to have a glowing red nose. As the aurora whirled above, it was agreed that this was a good thing. There was magic in the air here, no doubt about it – but perhaps that would have been stretching our credulity a bit too far.