After decades off the tourist map, Montenegro looks set to become as much of a draw as its neighbour Croatia – and deservedly so, says WILLIAM HAM BEVAN

There’s seemingly no end to the celebrity anecdotes rooted in Sveti Stefan, and no one who knows more of them than Diki Kazanegra. Over a pre-dinnner rakija – the grappa-like spirit that lubricates every social occasion in Montenegro – he holds forth on the days when he was general manager of the island hotel, and played host to the international jet set.

“Under Tito, we could get our hands on anything,” he says. “We snapped our fingers, and they’d fly it down from Belgrade. When the President of Mongolia was here, he demanded camel’s milk: no problem. Princess Margaret came to stay, and we didn’t know the protocol that she had to have a photograph of the Royal Family in the room. But as soon as we found out, it was here in two hours.” 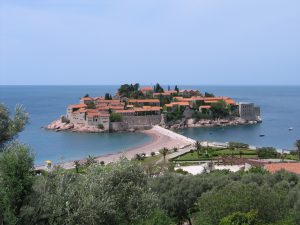 We sit in the simple, rustic-styled drawing room of villa 118, the best billet on the island. Finding it to be vacant of guests, Diki had insisted that we take a look around; so now we lounge around the table where Prince Charles would have taken his first breakfast with Diana, had not a last-minute leak to the press forced a change of honeymoon destination. It is here, he tells us, that Richard Burton and Elizabeth Taylor disturbed nearby residents with their shrieking rows, and that Sophia Loren once harangued the cordon-bleu cook for his inability to cook pasta al dente.

I wonder if there will be as much candour from him about the lean years that were to follow. However, Diki – a bass-voiced, barrel-chested doppelganger for the late Screaming Lord Sutch – turns out to be just as forthright about the neglect of the Eighties, moving into outright stagnation under the sanctions and isolation that came in the Nineties. Given the atrocities that unfolded elsewhere in the former Yugoslavia, it’s easy to be glib about a spot of decay in a luxury hotel. But, as Diki points out, the whole of Montenegro suffered. “Few of us supported Milosevic, but we were all cut off from the world. Young people had to sit out the best years of their lives just waiting, doing nothing.”

Now the visitors are starting to return, including the glitterati. “Ask the staff about Jeremy Irons,” Diki says, but there’s no need to. The actor’s visit to the island in 2002 – putting Montenegro back on the Hollywood map, and notching up a £65,000 bill that all but prevented the place collapsing into the sea – is one of the first things mentioned in all the tourist literature around here.

It’s not difficult to gauge why so many stars made their way along the narrow causeway to Sveti Stefan. Built in the 15th century as a fortress village against the Turks, it proved just as hardy a bastion from the long lenses of the paparazzi when it was transformed into a hotel in the early Sixties. Its tile-roofed, honeysuckle-fringed cottages were easily converted into suites and rooms for just over 200 guests; a casino, pool, sun terrace and several bars added the finishing touch. The tiny church on the apex of the outcrop is the only clue as to its former life as a real community.

Sveti Stefan is justly held up as the totem of Montenegrin tourism, though it is still far from its former self. While everything looks improbably perfect in the middle distance, flaws become apparent close-up. Window frames, you notice, have gaps where rotten woodwork has remained unreplaced; in places, electrical wires hang from the walls, and patches of plaster crumble unattended. But there’s far more to this small republic than one island. Some of the claims made for the emerging tourist destinations in Eastern Europe are absurdly inflated, but Montenegro is a true sleeping beauty. Its 290km Adriatic coastline is the biggest draw, and holds a trump card over its next-door neighbour, Croatia: most of the beaches are of sand rather than shingle. Better yet, many of them remain underdeveloped.

Just across the bay from Sveti Stefan is Budva, one of the most popular of the resorts. At the end of a smart promenade – along which lie some of the region’s best fish restaurants – are the walls of the Stari Grad, or old town. This is a miniature Dubrovnik: a fun-size citadel of shady, turn-again alleys, emerging into squares of austere-looking churches and courtyards of bustling bars. Early evening is when the old town comes alive. The custom of the passeggiata is as strong here as it is across the Adriatic in Italy, and the cobbled streets soon fill with bright young things on their nightly walkabout – chatting, meeting up with flamboyant kisses, showing off their latest labels, or affecting to ignore each other altogether.

We settle down at Caspar, a bar with thumping techno music and seating under a canopy of pine trees. By chance, our guide spots an old friend, Jennie, who joins us for a Niksicko beer. Having come to Montenegro from the UK as a tour rep two years ago, and hating the place at first, she has just completed on her purchase of a beachside apartment just outside Budva, for a princely £25,000. We sit back to watch the young locals – almost uniformly tall, tanned and obscenely healthy looking – strut their stuff. “You get a lot of talent scouts here,” she says, “Montenegrins are about the tallest race in Europe, so they’re checking out the girls as models, and the blokes to be basketball players.”

I ask about how simple it is to fit in as an expat. “It’s a friendly place, but there’s etiquette. British women often settle down with local men, but hardly ever the other way round,” Jennie says. “Montenegrin girls are terrified that people will think they’re just out for money. That’s one of the worst insults around here.”

Striking out further afield from my base at Sveti Stefan means I have to brave the hairpin coastal roads. A word of warning: the Montenegrin way of driving would give pause to the average stock-car racer. We scream past antique Renault 4s and Fiat Topolini – both made here under licence in the Communist days – in overtaking manoeuvres with a margin for error measurable in centimetres. At one point en route to Kotor, I ask my driver about the plaques and floral tributes that appear every kilometre or so along the roadside: surely these can’t all be memorials to those who met an abrupt end on the highway? “Yes,” he says, laconically. 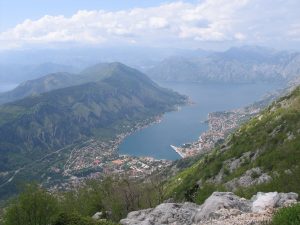 The old town of Kotor is one of two UNESCO-protected sites in the republic. (The other, somewhat improbably, is the second-biggest river canyon in the world, behind the Grand Canyon – the Tara canyon, in the north.) With its commanding position on the edge of a fjord, and fortifications that include 20m-high walls and a fortress clinging to a cliff 200m above the town, this was one of the Adriatic’s best-defended bastion towns. Dating back to Byzantine times, it bears the greatest influence from its time under the protection of Venice – from the Venetian lions that adorn the main gatehouse, to the many palaces and towers in the characteristic styles of the high renaissance.

Montenegrin folklore has it that the town has never been taken by force of arms; but no amount of fortification could save it from the catastrophic earthquake of 1979. Kotor’s gleaming appearance is a fine testament to the care taken in restoration. It would almost seem too shiny and perfect, but there’s always the sense that this is a real, living town. As I wander, I hear the sound of someone scraping out-of-tune arpeggios on a violin, and a rich smell of fish stock drifts down from a Juliet balcony. Locals and tourists alike hide from the glare of sun on mirror-like marble, under the parasols of the many terrace cafes. And the innumerable, plump old-town cats lope and snooze, though I am disappointed not to spot the famous Micun, acknowledged king of felines, who is usually to be seen patrolling the streets around St Stryphon’s Cathedral.

On my final night at Sveti Stefan, some of the other residents join me on the terrace outside my room for an impromptu farewell party, while the dark sea roars into the coves and cliffs below (the rooms on the outside of the island are certainly not for light sleepers). I nip away to the casino to borrow a corkscrew for our Vranac wine, and find the place deserted, save for bored-looking staff in croupier livery. Nobody will be breaking the bank in Montenegro tonight.

Corks popped, we talk about what the future will bring for this small island, and this small republic. Next year will see Montenegro poll for independence from Serbia, potentially drawing a line under the short and troubled history of Yugoslavia. Whatever the outcome, Sveti Stefan will be under new management. The government is putting the running of the hotel out to tender, and the world’s most prestigious resort chains are expressing an interest. Rack rates of up to £550 a night are being mooted. It can only be good for Montenegro, but I suspect it will be a long time before I have another chance to sip rakija over tales of royalty in Villa 118. Get there while you can.