Mountaineering lore has got it right: the last few yards of the ascent are always the worst. My stomach felt as bloated as a proverbial lead balloon, and each uphill step bolstered the suspicion that while I’d been sleeping, some renegade surgeon had whipped out the sinew in my legs and replaced it with perished india-rubber.

At length, I succeeded in hauling myself and my skis to the summit; and panting like a St Bernard, gazed back down over the route of my climb – all the way up the stairs from the car park to the foot of the gondola queue. Valeria, my ski guide, aimed a look of pity in my direction. ‘So,’ she said, ‘it was a big dinner last night?’

I confessed that it had indeed been a big dinner. At La Siriola, one of the three Michelin-starred restaurants in the Badia valley, I had opted for the tasting menu: six courses, matched with four different wines (excluding, that is, the prosecco served with the canapés, and a generous grappa to finish). Game was the restaurant’s speciality, with melt-in-the-mouth reindeer tortelli following on from rich hare and Asiago-cheese dumplings. 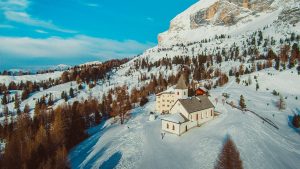 The main event had been a hay-smoke scented loin of deer with figs and pomegranate jelly, alongside a ballsy 2000 Barolo. According to my notes – which got more grandiloquent as they became less legible throughout the evening – this dish was nothing less than ‘life-affirming’. It had not taken me long to get to sleep that night.

I had expected a disdainful reaction from Valeria – a ski instructor of lithe and ascetic appearance, who ran a climbers’ bunkhouse in the summer. She had already pointed out to me the off-piste gully she was intending to climb up and ski on the weekend: a vicious slit in some far-off cliffs that looked to have the width and gradient of a playground slide. But instead, she was enthused. ‘Ah, La Siriola,’ she said. ‘It’s one of the best. Where else are you going to eat? There are many more that you should try.’

She was right, and I soon came to realise that her zeal for the local gastronomy was widely shared around here; this was no place for the puritanical. The three of Alta Badia’s restaurants that feature in Michelin’s Red Guide may be its major draw for foodies – two in San Cassiano and one in nearby Corvara, towns of just 700 and 1,200 inhabitants respectively – but the culinary flair and pride extend way beyond this trio. It is difficult to eat badly anywhere in this part of the Dolomites, even in the most unprepossessing of mountain restaurants.

In this respect, Alta Badia is a world away from swanky French resorts such as Courchevel, which have top-end dining to silence the pickiest gourmand, but offer a far less inspired (and way overpriced) choice up on the slopes.

Badia is one of just five valleys in the Dolomites where Ladin – an ancient language derived from mercantile Latin – is still spoken. Its cuisine is similarly distinctive, and has enjoyed a revival in recent years. Lunchtimes gave me a chance to try out the classics, including the deceptively filling peasant staple of panicia, or barley soup.

The restaurants took pride in their quirks and idiosyncrasies. Looking for a carbohydrate fix, I ordered gnocchi in Badia cheeses at the Hotel Armentarola; and at the end of the meal, the waiter appeared with two pewter medicine spoons of grappa. Like a Ladin Mary Poppins, he explained that I should take the bitter one first, ‘for digestive health’ and follow it with the fruit grappa ‘to help the medicine go down’.

Many times more bizarre was lunch at Hotel La Perla, in Corvara. Here, La Stüa de Michil is another Michelin fixture, but we enjoyed simpler fare in the brasserie-style lounge. Afterwards, the sommelier asked if we wanted to tour the wine cellar. We dutifully tramped downstairs in our ski boots, through an anonymous door marked ‘Mahatma Wine’ – and into a disjunction from reality to rival Alice’s trip down the rabbit hole. The cellar of La Perla has been transformed into a wine-themed fantasia to rival anything at Disney World. Before starting through the labyrinth of 12 themed chambers, Valeria and I were asked to take a pair of rose-tinted glasses from the entrance rack, ‘because wine alters the way you see life’.

Had I not been able to later verify the experience online (see www.mahatmawine.it) I’d have put this afternoon down to hallucination brought on by too much rich food. Among the exhibits were a chrome wall of dancing champagne bottles; a temple devoted to Sassicaia wine, in which laser lights traced a path through a labyrinth of bottles; and the mildly disturbing experience of being spoken to by various vintages of Bordeaux – ‘monarchs among wines’ – in their very own throne room.

Lastly, we passed into a studio where our sommelier played us a parting fanfare on a theremin – the musical oddity used by the Beach Boys on Good Vibrations. The tour took a whole 45 minutes before we emerged, dumbstruck and blinking, into the light again.

My own billet was in the heart of San Cassiano, at the Hotel & Spa Rosa Alpina – home to the St Hubertus, the best established of the starred restaurants. The building, a much-extended former manse, has been in the Pizzinini family since 1940, and three generations have gradually developed it into the region’s most celebrated hotel and spa resort. It was here that Daniela Steiner, who married into the family, established the first of her eponymous spas in 1989, raising the bar for holistic pampering treatments; satellite operations were to follow in Monte Carlo, Egypt, Sicily, Zermatt and Badrutt’s Palace, St Moritz. Formula One supremo Flavio Briatore is a regular guest and friend of the family, and Prince Albert of Monaco is also among the notables to have dropped in.

I don’t do spas, and my date at St Hubertus was yet to come; but it took scarcely a day to decide that even stripped of these two selling points, the Rosa Alpina would still have been my sort of place. The decor is elegantly cosy: all wood panelling, wrought ironwork, deep ochre furnishings and small, understated flourishes that come across like a shared private joke, such as the two carved angels in the lobby bar. Of the three other restaurants in the hotel, I particularly enjoyed the informal Wine Bar and Grill. Here, one night, a pizza siciliana from the wood oven proved my only respite from gourmet dinners; but it was so good, I felt little guilt at the dereliction of duty. 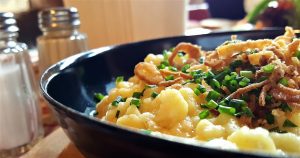 There was, of course, a little bit of skiing to be done between the meals. My mission to get the most out of the resort’s gastronomic delights made movement a little sluggish first thing in the morning, when I felt as though my body’s centre of gravity had shifted at least a foot lower to the ground (a phenomenon I christened Weeble syndrome, after the ovoid plastic toys from the 1970s that ‘wobble but won’t fall down’). Mindful of this, Valeria would set a leisurely starting pace, then craftily ratchet up the tempo until we were covering some serious mileage.

Alta Badia is part of the massive, if fragmented, Dolomiti Superski domain, taking in 450 lifts and 1,200km of runs on a single lift pass. The scenery is astonishing: bare limestone monoliths rising near-vertically from the snowy foothills, radiating an eerie pink hue at dawn and dusk. Most breathtaking of all was the ski run down from the 2,770m Lagazuoi peak. A 7km descent runs from the World War One tunnels and pillboxes at the top, through a silent valley between soaring cliffs and frozen waterfalls. The Rifugio Scotoni, halfway down, is surely the most fortunately placed mountain restaurant to be found anywhere.

A prime attraction is the chance to ski the Sella Ronda, a 40km circular route around the great limestone monolith of the Sella massif. Owing to lunch commitments, we never quite made it all the way round. But I did pester Valeria to take me on a pilgrimage to the championship run at Val Gardena. Here, in the World Cup downhill of 1981, Konrad Bartelski came within an ace of winning, and his second place remains the best result ever recorded by a Brit. Since witnessing this as a seven-year-old kid glued to Ski Sunday, I had always wanted to ski the run myself. One more ambition ticked off.

On my last night at Alta Badia, I had a reservation for the St Hubertus restaurant at the Rosa Alpina. I decided to leave the notebook in my room for this one, and placed myself entirely in the hands of the maitre d’; he suggested a tasting menu, pairing a wine with several of chef Norbert Niederkofler’s signature dishes.

I most recall biting into an earthy ravioli of porcini mushrooms; the bracing, toothpastey tang of pine-needle essence in a risotto; and veal that yielded to the teeth like no veal I’ve tasted. But, as with all the best meals, the experience added up to far more than the sum of its parts. Contentedly worn-out from the day’s skiing – and knowing that the only stairs I would have to deal with in the morning would be those to the aircraft at Innsbruck Airport – I let the experience wash over me, as the wines worked their magic. Life affirming, indeed.