King of the wild frontier

There are bears in the woods, orcas in the shallows and bald eagles in the treetops – but just as excitingly, there’s a hot tub in the spa and sashimi on the menu. WILLIAM HAM BEVAN encounters truly wild luxury

My guide looked concerned. “Are you sure you’re okay with this?” Mark asked. “It’s a touch choppy out here today.”

Unlike their southern neighbours, the Canadians have a gift for understatement. On our small motorboat off the coast of Princess Royal Island, the two of us were being buffeted by seas that would have given Captain Ahab second thoughts about leaving terra firma. I could stay upright only by continually rocking the opposite way to the lurching boat, fighting for balance like a latter-day Buster Keaton. All the while, the rain sluiced down in sheets.

And was I okay with this? Not just okay, but utterly, joyously exhilarated. Tucked up in a warm waterproof survival suit and waxed cotton cap, a can of Kokanee beer to hand, I stared through drenched spectacles at the thickly wooded mountains rising from the sea, and Britain felt like a false memory. 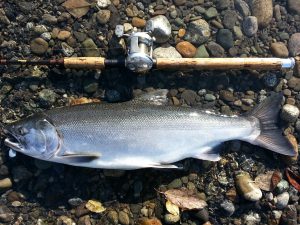 We were here in search of salmon, and with luck, to catch my first-ever fish. I’d feigned comprehension earlier when told that the plan was to go “trolling over a bait ball”. This turned out to mean that we would cut the engines of the boat to doggy-paddle speed, drop lines from the two fishing rods secured to the stern, and sweep back and forth over a shoal of the small fish preyed upon by the Coho and Chinook salmon that lurked in these waters.

With the torrents of rain and the boat’s erratic tilt and ride – not to mention the concentration required to guide my beer faceward without swilling the stuff down my collar – I failed to notice that we had a bite. Mark yelled to me, pointing out that one of the rods was arching toward the water, its line taut as a bowstring, the reel screeching. I grabbed it, and as instructed, let the line out until the fish tired and tension eased. Then it was a case of frantically reeling in, easing off once again when the fish took up the slack in a renewed bid for freedom.

This waltz went on for five minutes: three steps forward, two steps back. Just as I had lost all sensation in my fingertips, a sparkle of silver scales broke the surface. Mark landed the gawping fish on board with our net, and carefully removed the hook - which, in accordance with British Columbia’s conservation laws did not have a barb.

“A shaker,” he said. “A young Chinook, about ten pounds. They put up a fight, don’t they? He’s too small to keep: we’ll let him go.” No matter. This was one tale that wouldn’t grow in the telling. I’d snagged the first fish of my life; that was enough for me.

The miasmal weather lifted just as we motored back around a cove to catch sight of King Pacific Lodge. It was appropriate symbolism for the ethos of the place: that if you look after nature, it will look after you. For KPL, as the staff call it, is not just the most exclusive and luxurious of British Columbia’s fishing lodges – and possibly all those of North America – it is also the most ecologically sound. Mounted on two vast barges, the lodge and its staff quarters are towed away from their mooring each winter, leaving the surrounding wilderness exactly as it has been for thousands upon thousands of years.

If wilderness is often a relative term, the islands on British Columbia’s western seaboard are the real McCoy. There are no roads within hundreds of kilometres. To get to KPL demands a northward flight from Vancouver to Prince Rupert, just shy of the Alaskan border, and then a transfer to the lodge by float-plane.

This last leg of the journey is a jaw-dropping experience in itself. Only from aloft is it possible to get an accurate idea of the scale of the Great Bear Reserve, one of the world’s largest rainforests. Moreover, for someone more used to a 737, being bounced around at low altitude in a five-seater De Havilland Beaver was something of a white-knuckle ride – although not so much so as to dent the wonder of watching a killer whale show off beside a ferry in the strait below.

The trek is worth it. When Sony heir Joe Morita acquired King Pacific Lodge in 1999, he decided facilities didn’t quite pass muster – so he spent a cool five million building another lodge from scratch on a new barge, and billeted staff in the old one. The result is a resort that remains in keeping with the wild surroundings. Only natural materials were used, as can be seen in the vast cedar spars that serve as beams, the slate floors, and the spectacular stone fireplace in the Great Room, the lodge’s social heart. Native Canadian art hangs around the airy dining room, and the spacious bedrooms and suites look out through tall windows over the bay or the wilderness. 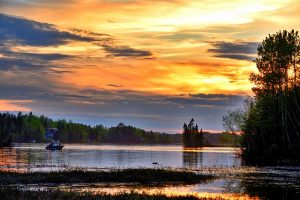 Here, over each evening’s gourmet dinner, staff cope with the logistical nightmare of finding out which activities guests would like to book for the next day. As well as the world-class fishing – freshwater as well as deep-sea – there is plenty to be seen and done. An interpretive hike amongst the 1,000-year-old hemlocks, perhaps? A boat trip up remote inlets to go beachcombing? Unless the elements decide to throw a tantrum, as they often do, it’s understood there will be no problem.

Then there’s the wildlife to be seen: humpback whales, porpoises and seals around the bays and straits of the Inside Passage, bald eagles overhead, wolfpacks and black bears in the forest. The undoubted star of the show is the Kermode, or ‘Spirit’ Bear – a snowy-white mutation of the black bear, which is seen nowhere else in the world.

But under Joe Morita’s ideology, showing consideration for the surroundings means more than looking after plant life and fauna; it also means respecting the people who were there before. King Pacific Lodge is moored on lands that are under the custodianship of a First Nations people: the Git Ga’at group, of the Tsimshian nation. Their land claims with Canada have still not been settled, but the lodge acknowledges Git Ga’at title of the land and pays as much to the indigenous people as it does to British Columbia for the right to use the land. Even in ecotourism terms, this is an unprecedented step, and one that has proved controversial.

It has certainly led to a unique sense of trust and partnership with the Tsimshian people, several of whom work at the lodge. On one morning, my guide and I joined a couple from Los Angeles and their two young children on a boat trip to a deserted Git Ga’at fishing camp – a place manned for only a short time each spring during the halibut and kelp harvest, but accessible to KPL guests by open invitation of the Git Ga’at elders.

As we treaded seaward from the camp’s rickety sheds, the profusion of sea life was extraordinary. Even the ground was alive with a carpet of giant barnacles, hissing and spitting tiny jets of water as we walked around them. The children marvelled at the lurid colours of the starfish and gloopy anemones among the rockpools, before helping the lodge staff to collect red and purple sea urchins. These would later end up as sushi, served at the beginning of our evening meal.

An lot of memories get packed into a week at King Pacific Lodge. I could happily hold forth about bushwhacking through thick cedars to a hidden bay, to find droppings from a recently departed bear – proof that they indeed do the proverbial in the woods. Then there was the kayak trip, over mirror-like waters, past an ancient Tsimshian burial site to take lunch at a Git Ga’at longhouse.

Most awe-inspiring of all was the heli-hike. Low cloud was forecast later in the day, so a 5.30am start was required. By this time, the lodge’s pastry chef had been up and working for one-and-a-half hours, and warm pain au chocolat was waiting.

My companions for the flight were two generations of a newspaper dynasty from Minnesota. We were whisked up to the mountain of an uninhabited island, which was still white-capped in June. Scrunching and sliding our way through the icy crystals, not yet softened by the morning sun, we picked a path around a frozen lake and scrambled up to the island’s highest peak. The reward was to look down over an immense, unsullied landscape of grey inlets and wooded islets. For all I knew, it might well, in the clichéd jargon of a Foreign Office spokesman, have been the size of Wales.

On the final evening, I stood on the porch, watching the sunset over the bay, sipping an Old Fashioned. Barely a yard away, chirping, moth-sized hummingbirds jostled for position at the vial of sugar syrup hanging from the balcony, and I was close enough to see their tiny tongues furiously lapping up the nectar.

Farther into the distance, a bald eagle stared me out from a treetop, while its partner made short work of a salmon on a rock below, framed by the vastness of mountain, sea and sky. In the end, it’s this drastically altered sense of scale that seizes the mind: an enforced humility in the face of the wilderness.