The kids are all white

Whistler is transforming itself from the glamour capital of skiing into a families-first resort, says WILLIAM HAM BEVAN

I don’t get the chance to fly first-class all that often. I suspect this much was obvious to the director of a certain multinational concern who sat next to me in the Executive First cabin on my flight to Vancouver.

I’d already struggled with small talk about his recent acquisition deals, his real-estate portfolio that spanned both seaboards, and his wife’s pedigree Weimaraners. Now the conversation turned to skiing, and what transpired to be our common destination. ‘You’ll like Whistler,’ he said. ‘But you know what you need to get the most out of it?’

Fifty million Canadian in the bank, perhaps? A black Amex card, and a sports utility vehicle the size of a Chieftain tank? ‘Kids,’ he explained. ‘You need kids of your own. Mine think it’s the best place on Earth.’ 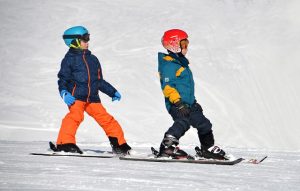 Despite Whistler’s reputation as a haven for smart young things, serious skiers and A-list celebs, he proved to be right. The resort is determined to become a top-class family destination. Whenever I spoke to British parents, the same three comments came up. Their children loved the place, there was skiing to suit everyone, and the trip had proved surprisingly competitive in price.

Even the most prestigious address in town, the Fairmont Chateau Whistler, is far from prohibitively expensive by the standards of Swiss or French resorts. Of course, it’s possible to get rid of a few more cumbersome dollars by checking in to the famous Gold Floors – the choice of celebrities such as Sylvester Stallone, Kevin Costner and Halle Berry.

Nevertheless, it’s the skiing, not the fixtures and fittings, that keep the stars coming here. Since the twin mountains of Whistler and Blackcomb came under the same management and lift pass in 1997, they have become North America’s most credible answer to Europe’s linked mega-resorts. The variety of terrain, ranging from suicide chutes to the gentlest of groomed trails, means no member of any mixed-ability group should ever be bored.

Whistler is somewhat notorious for its rainy weather, but this is more of an annoyance than a holiday-breaker. Clouds over the village have a silver lining: a shower at resort level tends to mean a fresh dump of snow further up the mountain. There are more than enough easy trails at high altitude, so the trick on grey days is to get to the upper slopes early, and stay there.

Keeping kids warm and dry is made easier by the superb lift systems on both Whistler and Blackcomb Mountains, which swiftly whisk you up above the elements on enclosed gondolas, or on chairs with bubble-covers. And even if a downpour turns the lower slopes into Ready Brek, it’s easy to avoid the sludge by taking the Excalibur or Whistler Village gondolas back down off the mountain – a process known as ‘downloading’ to the Canadians.

Offloading is another thing, but for the days when one passes on responsibility for the children to a kids’ club or ski-school group, there’s tough skiing in spades (or more aptly, diamonds, given the North American classification). The bowls accessible from The Peak lift on Whistler Mountain are fantastic when the snow is good, and surround some double-black-diamond gullies that are terrifying just to look at, let alone think of attempting. The Dave Murray Downhill run is another stand-out trail, and one that’s pretty much as difficult as you decide to make it. A strong intermediate could pick their way down. Skied faster, it’s a challenge for anyone. 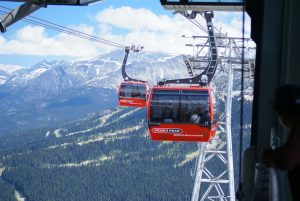 Meanwhile, the kids can be left in their own world, thanks to the programmes run by the resort’s Redcoat arm, Whistler Kids. There is even a lift on Blackcomb Mountain, the Magic Carpet, that is reserved for use by little ’uns. The week or weekend-long courses at the Whistler Kids ski school are informal, fun and extremely popular – especially the Ride Tribe programmes for teenagers – so it’s a good idea to pre-register in advance of travelling out.

There are a few differences between the ski culture of British Columbia and Europe. Mountain restaurants here are generally places to load up on carb-rich fuel for the afternoon session, rather than to settle down for a long, boozy lunch. It’s also worth noting that there’s a ban here on bringing under-19s into bars. The cherished afternoon ritual of a couple of beers at the foot of the mountain, with Oranginas for the kids, is less practicable here – and bringing an 18-year-old will result in a fair amount of teenage teeth-gnashing, as ID checks are stringently enforced where alcohol is sold.

All the more reason to pack in as many après ski activities as possible: a wise choice for a night out is an expedition with Canadian Snowmobile, so they can put their angst through the shredder at some serious revs-per-minute.

One activity unique to the Whistler is run by Ziptrek Ecotours. Fitzsimmons Creek, the wooded valley that runs between the resort’s two mountains, has been criss-crossed with a series of static high wires, secured to a complex of cedarwood platforms and catwalks high in the tree canopy.

A tour takes in three-hours of zig-zagging the canyon, with each member of the group launching off SAS-style into the abyss, clipped to a pulley and harness. The views are spectacular – until night falls, when everyone is issued with a miner’s lamp. What’s more, it’s all certified ecologically sound, and is educational to boot: the guides and riggers are all naturalists well-versed in the flora and fauna of the region.

Whatever you choose to do in Whistler (or elsewhere in Canada’s ski stations) one thing stands out: the service. This is a can-do culture. Bringing a family skiing means no plans can be set in stone, and here, people recognise this.

They’re also overwhelmingly friendly and courteous, and something as simple as staff in a hire shop remembering your kids’ names can go a long way toward making a ski holiday. This, more than anything else, is what visitors to Canada’s ski resorts take home with them – and, year after year, what prompts them to return.