In 2017, Staffordshire University decided on a full relaunch of its alumni magazine, SA, which I had edited for four issues with the Birmingham-based publisher RileyRaven. We pitched and won the business in an open tender.

On a tight budget, we put together the first edition of Horizon – a magazine that built upon the successful elements of its predecessor and updated its look. 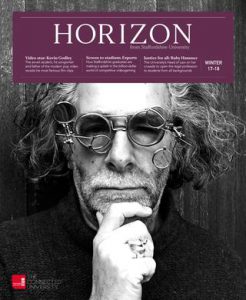 Our cover star, Stoke College of Art alumnus Kevin Godley, was subsequently awarded an honorary doctorate in what might be called a gradual graduation.