This eight-page broadsheet supplement and microsite was St Kitts and Nevis’s first promotional activity with a UK newspaper. It represented a big marketing spend for the smallest and least populous nation in the Americas.

Photographer Andy Paradise and I were sent out to the Caribbean to explore the islands and profile some of their best-known personalities, from reggae artists and former West Indies cricketers to historians, restaurateurs and British expats. We met the prime minister and interviewed the cabinet member responsible for tourism.

The campaign proved hugely successful for the tourism board and for British Airways, and earned nominations in the 2011 Media Week and Campaign Media Awards.

Below are some excerpts from the supplement. All photography © 2011 Andy Paradise.

LITTLE GEM OF THE CARIBBEAN 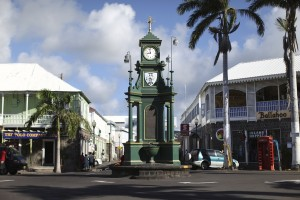 There can be few better spots to settle and watch the world go by than the open balcony of Ballahoo restaurant in Basseterre, the capital of St Kitts.

Sit here with a fruit punch to hand and a gentle sea breeze cooling the cheeks, and you’ll soon find yourself drawn into the street theatre of The Circus, the town square below.

Beneath the palms, taxi drivers joke and gossip as they await a fare, their cars and minibuses adorned with slogans such as “Who loves you, baby?” and “Who’s your daddy?” Suited office workers hurry to lunch, and cruise passengers wander up from the quayside to shop for sun-hats and sarongs. 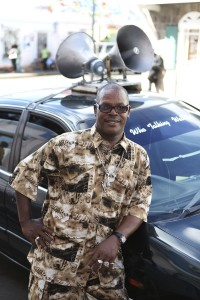 A distinctive baritone breaks through the general hum every quarter-hour or so as Calypso Reggie passes through The Circus, driving his trademark black sedan with its two roof-mounted bullhorn speakers. The comedian, compere and calypso singer is effectively Basseterre’s town crier. He announces everything from reggae gigs and political meetings to obituaries of island folk – even forthcoming radio programmes.

It is all a world away from the Caribbean of gated, all-inclusive mega-resorts, where status is determined by a coloured rubber wristband and residents are discouraged from venturing out into the world beyond the perimeter fence. But St Kitts – the larger sibling in the twin-island Federation of St Christopher and Nevis – is rather a special place…

If you hear Kittitians talking about lime, they may not be referring to the ingredient that adds a sour zing to the rum punch. Used as a verb, lime is (forgive the pun) a key word in the island dialect.

To go limin’ means to kick back, chill out, and spend time relaxing in company – with the further implication that this takes place at a bar, and most probably near a beach. 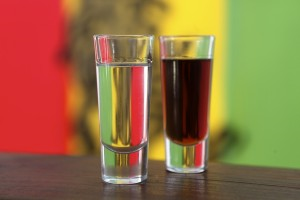 However imprecise the definition, one matter is beyond doubt: there’s no shortage of places to lime in St Kitts. The most noteworthy scene is at Frigate Bay, where the line of beachside bars known as the Strip is to be found. From Thursday to Saturday night, this becomes the epicentre of island nightlife.

Possibly the best-known bar in St Kitts is Mr X’s Shiggidy Shack. It’s as ramshackle as the name suggests, with a small bar and dancefloor under a canvas roof, and more seating under rattan awnings on the beach outside. 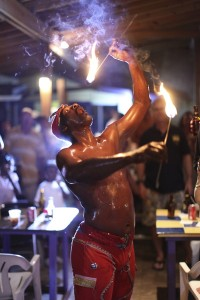 Everyone ends up here on a Thursday night, when a bonfire crackles on the sands. Locals, expats and visitors alike gather to chat, drink and munch on grilled ribs, fish and jerk chicken. The evening also sees Mister Fire do his weekly turn, extinguishing lit torches in his mouth and limbo-dancing under a blazing bar to the frenzied accompaniment of the band.

On Fridays and Saturdays, many of the places on the Strip stay open well into the small hours, and groups of people meander from one bar to the next. Each has its own character. The Dock, under the Timothy Beach hotel, is probably the smartest of the hang-outs, and noted for cocktails – as is Buddies, right over at the other end of the beach. Anyone who writes off the piña colada as a tacky horror of the Seventies would be well advised to try one here. 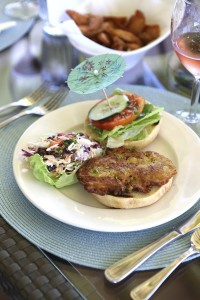 Much of the Kittitian cuisine is familiar to the whole of the West Indies. Barbecued pork and chicken are usually well marinated with jerk or creole seasoning, and may be eaten with rice and peas, sweet potato or johnnycakes (a type of cornmeal bread).

High-end restaurants put a sophisticated swing on traditional West Indian cooking, incorporating elements from many other cuisines. At the other end of the gastronomic spectrum is the hearty street food of St Kitts.

Basseterre is speckled with stands selling local specialities, of which three demand particular mention. Goat water is the perfect comfort food: a robustly seasoned stew of goat meat, breadfruit and dumplings. Then there’s Kittitian black pudding – grainier and spicier than the British version – and souse, or stewed pigs’ trotters. 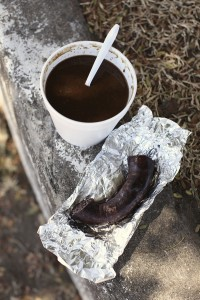 At Nicole’s stall on Cayon Street, we were doled out generous portions of goat water in plastic bowls, and truncheon-sized links of black pudding. Wolfing these down under the shade of a mango tree provided one of my most memorable and satisfying lunches on the island.

And it’s a quintessential island experience to buy a green coconut from a roadside vendor, who will open it in front of you with the expert swipe of a machete and offer a straw to slurp out the fresh coconut water.

In St Kitts, you’ll often find street and market vendors selling sweet cordials such as mauby (produced from a bark of a shrub) and ginger beer. One revelation was that sarsaparilla, a drink most often associated with the Victorian temperance movement in Britain, has a rather different reputation here as an aphrodisiac and virility booster. 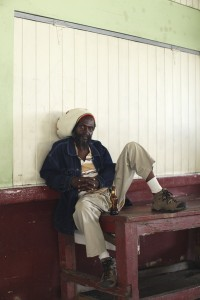 Such home-made soft drinks are a Kittitian tradition, and you’ll find them in many bars and restaurants. A freshly squeezed fruit punch, served over crushed ice, makes the perfect thirst-slaker for a hot day – as does a chilled bottle of Ting, a locally produced grapefruit soda.

The ubiquitous beer of St Kitts is Carib, an easy-drinking lager that’s perfect for sipping in the sun, and is produced just outside Basseterre with its sister brands Stag and Skol. Local versions of Mackeson and Guinness stout are also widely available, and brewed to considerably higher strength than in the UK.

The true national drink, though, is rum. Although cane production has ended on the island, several types are still blended and bottled on St Kitts. Belmont Estate produces smooth white, golden and coconut rums, and a range of flavoured rums are sold under the Brinley Gold label. 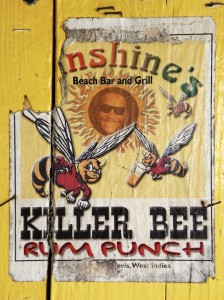 Every visitor should sample a classic rum punch: a potent concoction of rum, fruit juices, sugar syrup and bitters, usually sprinkled with nutmeg and cinnamon. Every bar takes pride in its own formula, and the question of which is the best is fiercely debated.

Unique to the island is CSR, a clear spirit distilled from refined cane juice rather than the molasses used to make rum. It’s most often mixed with Ting to make the dangerously drinkable “Ting with a sting”. And there could scarcely be a more appropriate drink for St Kitts: like the island, it’s zesty, effervescent and more than a little heady.