The character of Ireland

This was a commission from Tourism Ireland, the cross-border body that promotes both Northern Ireland and the Republic.

Andy Paradise and I were sent around the north and north-west of Ireland with a brief to “promote the attitude and warm-heartedness of the Irish people”. For Andy, this meant as much time spent on portraiture as landscapes, while I put together interview-led features as well as colour pieces.

Below are some excerpts from the supplement. All photography © 2009 Andy Paradise.

WHEN THE CRAIC APPEARED 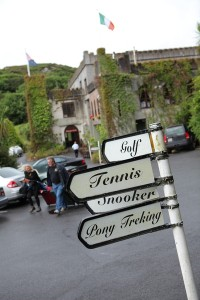 Connemara is the wild west of County Galway – “a savage beauty” in the well-quoted words of Oscar Wilde.

Inland are the rough peaks of the Twelve Bens and Maumturk Mountains; around them are lonely boglands and wide loughs of flint-grey waters. But we were headed for the source of our day’s spa treatment, the coastline around the small town of Clifden.

Before too long, we drew up to the Abbeyglen Castle Hotel – which lived up to its name, with ivy-clad towers and crenellated battlements. We had heard that this place was a cushy billet, and the five Aston Martins in the drive (not to mention the helicopter squatting alongside the lawn) did little to dent our expectations.

At dinner, we were greeted by Brian Hughes – hotel proprietor, mastermind behind Connemara Safari Tours, and local man to the marrow. “Good that you’re here after dusk,” he joked. “You can’t see all the dust that way.” 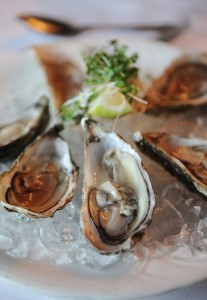 He explained that appearances were deceptive: the chopper on the helipad was a rescue aircraft, and that the expensive cars were owned by a group of touring Aston enthusiasts who happened to be staying that night. While undoubtedly luxurious, the Abbeyglen was certainly not reserved for the supercar-owning classes.

Over digestifs, Brian and his colleague Gerry MacCloskey – an expert on the archaeological treasures of the region, with an infectious enthusiasm – spoke of their Safari Tours itinerary. Each week, the pair lead walking groups around the islands off the coast of County Galway.

These include Inish Bofin, with its monastic sites and Cromwellian fort, and the eerie isle of Inish Shark, deserted by its last residents in 1960. “Island hopping is something you think of in Greece,” Brian said. “But we give our groups a unique experience here.” 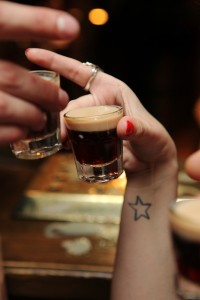 Brandies were all very well, but we fancied a spot of the black stuff and took a ten-minute walk into Clifden. Standing in the main square, we could hear Irish music lilting toward us from several points of the compass.

Following our ears, we ended up at Vaughan’s pub, and were glad we did. It had been taken over for a private birthday party – and this being the West of Ireland, we were immediately invited in.

The celebrations had packed out the small front bar. At the front, a three-piece band played a jig, to which the older revellers hopped and reeled. The youngsters ordered shots of “Baby Guinness” – coffee liqueur topped with a “head” of Irish Cream – while we contented ourselves with the real thing, and propped up the bar. 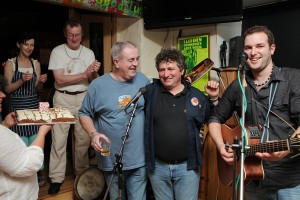 Throughout the night, the band never achieved a stable line-up, as musicians joined in and drifted away; sometimes with a father giving way to a son or daughter.

It didn’t matter, as everyone could play as though they were bewitched. We left reluctantly, with the manic refrain of the fiddle, pipes and bodhran ringing in our ears all the way home.

KING OF THE PUDDING RACE

“I still prefer black pudding fried, just simple,” says Sean Kelly. “But now you have chefs using it as an ingredient in all sorts of recipes. You hear it mentioned in the same sentence as foie gras.” 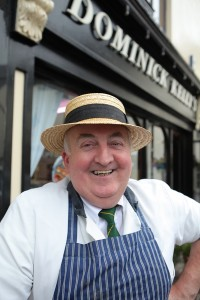 We meet Sean at Kelly’s Butchers Shop, which has stood on the main street of Newport, County Mayo, since his father opened it in the 1930s. It’s the sort of place I wish I had on my own doorstep. We watch as a steady stream of customers wander in for their bacon, chops and sausages, if not just for a natter with Sean or his brother, Seamus.

But it’s Kelly’s traditional black and white puddings that have put the place on Ireland’s gastronomic map. They’re recognised not just as an essential ingredient of the traditional Irish breakfast, but as a unique artisan product that has become famous around the world. 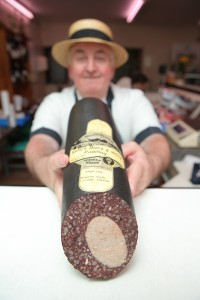 “We’ve won all sort of awards,” Sean tells me. “As well all our All Ireland prizes, we won gold medals at the Great Taste Awards in Britain. Most recent was a bronze in a boudin noir competition in France.

“We wouldn’t normally mention a third place, but I’ve been told that the French almost never give their awards to outsiders.”

One of Sean’s innovations is a double pudding (“Someone said we should call it a roulade,” he muses, shaking his head) which has a white-pudding core encased in a black-pudding layer.

“That came about when my wife said I could only have one slice of pudding with my breakfast,” he tells us, patting his paunch. “That’s what marriage is about – compromise!”

WHISTLING UP A FESTIVAL 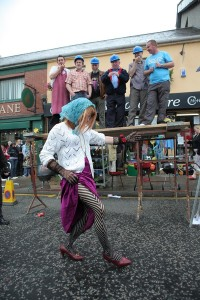 In these enlightened times, builders wolf-whistle passing women at their peril. But for one afternoon in County Fermanagh, the practice is not only tolerated but encouraged.

In the main square of Irvinestown, I stand and watch as the finalists of the inaugural All-Ireland Wolf Whistling Championship take their marks on a specially erected piece of scaffolding.

They’re a rum bunch, ranging in age from mid-20s to past 60, and each wears the customary brickie’s hard hat. At a signal, a “local lovely” – who looks suspiciously like a man in a turquoise headscarf, satin skirt and fishnets – begins a slinky parade in front of the competitors. An ear-splitting cacophony of adulation breaks out; but one whistle proves shriller than the others, and local butcher Stephen Millar duly takes the laurels.

It’s all part of the Lady of the Lake celebrations. The 10-day event is the biggest cross-community festival in Northern Ireland, attracting revellers from throughout the county and beyond. The wolf-whistling contest is the brainchild of local hotelier Joe Mahon, who has a track record in organising offbeat events for the festival. “Let’s see,” he says. “In the last few years we’ve had a leprechaun parade, and a turkey walk. There’s something different every year.” 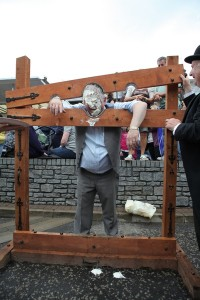 He has little time to chat, though, as it’s now time for the Piepowder Court – a mock tribunal at which the town’s great and good are arraigned for offences supposedly committed over the past year. The next time I spy him, Joe is in the dock, and soon afterwards in the pillory. One of the duties of Claire Timlin, earlier crowned the year’s Lady of the Lake, is to stuff a custard pie in his face, to the raucous cheers of the townsfolk.

Later on, we go to Mahon’s Hotel for the evening’s entertainment: a boxing tournament. The first bout looks set to be a mismatch, with Liam “The Lion” Leonard taking on “The Sheik of Irving”. The latter, who approaches to the ring in robes apparently fashioned from an elasticated undersheet, must have an age advantage of at least 30 years over the grey-maned Lion.

Nobody would dare suggest that the match is not taken in deadly earnest, despite the comedy boxing gloves being almost as large as the boxers’ torsos (and the fact that Jameson’s, rather than water, is offered to the pugilists by their seconds). In the second round, Leonard gets a lucky swing in, and bounces the Sheik clean out of the ring. The hall erupts into a frenzy. 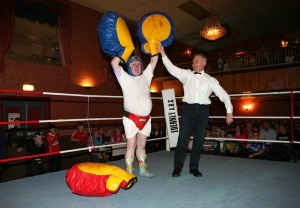 I can’t help harbouring a suspicion that – how should I put it? – there may have been some fixing going on behind the scenes.

But afterwards, when I speak to someone not unconnected with the bout (on strict condition of anonymity) I learn the truth. “Sure, he wasn’t supposed to take a dive until the third round,” my mole says. “That idiot fell out for real!”

As we leave, the second bout is being announced – a grudge match between two Mahon’s Hotel regulars to settle the question of who last bought a drink. This party, we sense, will be going on late.